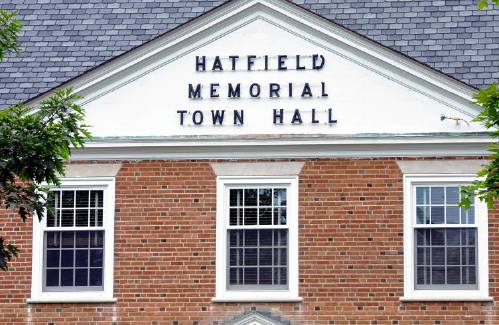 HATFIELD – As a $12.03 million project to upgrade the aging sewage treatment plant arrives ahead of the annual town hall meeting, a resident is again calling on the town to redo part of a building project. $3.6 million water and sewer upgrade on Highway 5, which officials say could drive those costs up by $750,000.

Voters will be presented with a 43-item mandate, including a $12.59 million operating budget that preserves city and school services, beginning at 6:30 p.m. Tuesday at the Smith Academy gymnasium.

The sewage treatment plant project, which will also be on the ballot in the May 17 municipal elections as a Proposition 2½ debt exclusion vote, is dependent on a grant from the U.S. Department of Agriculture which will reduce the cost to taxpayers to approximately $9 million. The $9 million loan will be spread over 40 years.

Board member Edmund Jaworski said in a recent review of warrants that it was the most cost-effective way to handle the work. “If we kick the road, the project will cost a lot more,” Jaworski said.

The plant is 35 years old and most of its mechanicals are also that age and have reached the end of their useful life, said Select Board member Brian Moriarty.

Three citizen petitions by Susan Berry are asking residents to review and revamp the ongoing water and sewer improvement project on Route 5, at a potential cost to the city of $750,000 if residents accept her request . This includes expenses related to the relocation of a sewer pumping station from 32 and 34 West St.

Berry, who has filed a lawsuit against the city, is concerned about a 1,100 square foot permanent easement at 34 West St. and a 250 square foot temporary construction easement at the same site. Last year’s town assembly failed, by vote, to move the Waxwing restaurant pumping station to this site.

The items brought in by the select committee would alter actions taken last year by eliminating required landscaping at 34 West St. and borrowing $750,000 to cover the costs of Berry’s items, if passed. This would add to the $1.6 million the city has already earmarked for the $2 million MassWorks grant to expand sewer service on Route 5 from Linseed Roads to Rocks, and water service on 2,200 feet along Route 5 south of Rocks Road.

Finance committee chair Darryl Williams told the board that the budget is only sustainable because of the injection of available cash and a significant number of one-time items. Even so, Williams said the city may have to apply for its first-ever blanket Proposition 2½ waiver in 2022.

“If we want to maintain the services contained in this budget, we will have to pass an operating waiver this year,” Willaims said.

However, the CPA account’s largest request, which was to use at least $375,000 to purchase 21 acres on Jericho Road, will likely be ignored, with the land to be sold privately. The city considered the site for a footbridge and boat launch for the River Mill, and community housing.

The capital assets will depend on $694,116 in available cash, including $48,000 for a police car, $71,758 for radio communications equipment for the fire department, $80,000 for a compactor at the transfer station and 100 $000 for drainage repairs from Raymond Avenue to School Street.

Department of Public Works director Phil Genovese is asking for $26,000 to remove 11 pine trees on Elm Court, which he says pose a hazard, and install a fence in the area, and $94,500 to construct a storage building at the same place for sand, salt and road materials.

Other items include the establishment of a new celebration committee and a revolving fund for its work as a successor committee to the Hatfield 350th committee, the reduction of the Conservation Commission from seven members to five, and the rescinding from a 2000 city assembly vote that fixed the Luminarium as the last Sunday before December 24.

Scott Merzbach can be contacted at [email protected]

Legoland set to open, but nearby historical artifacts ‘overlooked’