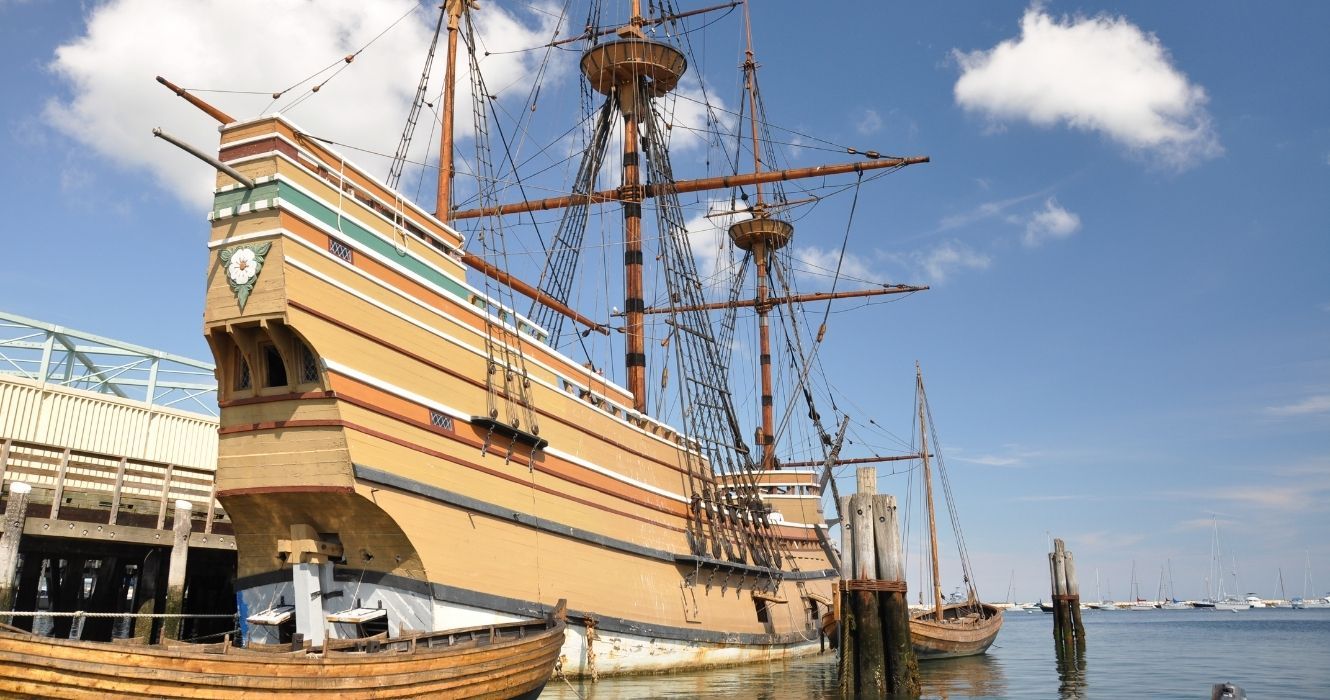 What to expect when visiting the Mayflower Replica Museum

Visiting the Mayflower II is like stepping back in time, and it’s not the only colonial spot visitors will find when they arrive at the ship.

One fateful day in 1620, a small ship reached Massachusetts and the world would never be the same again. Out jumped the first of the Pilgrims to the New World and the gears were set in motion that would one day give birth to the State of Massachusetts and then to the United States. Today the original Mayflower is long gone, but the Mayflower II replica is on display today. It is on display at the State Pier in the Pilgrim Memorial State Park in beautiful Plymouth, Massachusetts. See here for other amazing US Naval Museums.

About the Mayflower II

The Mayflower II was built from 1955 to 1956 in Devon, England in cooperation with the Americans, then crossed the Atlantic to recreate the original crossing.

The ship is very small, many visitors are surprised at how small it is in real life, but it is actually a full-scale reproduction of the original tall ship that brought the first of the pilgrims. After sailing on other missions, she was brought home to State Pier in the Pilgrim Memorial State Park just in time to celebrate her 400th anniversary of the arrival of the pilgrims.

Today it is part of the much larger Pilgrim Memorial State Park and therefore anyone visiting should visit the entire park. But to visit only the Mayflower II, it is possible to buy tickets for it only. During the tour one can also chat with its modern crew members and learn all about modern and old ships.

The Mayflower is open to the public but is an authentic replica of the original ship. Therefore, it is not fully accessible and people with walking difficulties may have difficulty exploring the ship with its ramps and several flights of stairs. The wharf where you can see the Mayflower is accessible however.

For more information, including updates on Covid-19 restrictions and information on the 17th century English village, check out their website at Plimoth.org.

One of the main attractions of the museum is the 17th century English village. This is a recreation of early Plymouth and is made up of half-timbered houses with careful attention to detail to recreate the actual village of the past. The village is full of types of objects possessed by pilgrims and heritage breeds of cattle and aromatic vegetable gardens.

This is a living museum where village workers and volunteers are dressed in historic clothing and play the role of the true original inhabitants of the settlement. They really help keep the place alive and also educate guests from the past, including the various hopes, fears, dreams and beliefs of the early settlers.

Here we can see the past come to life with the gender roles of the time. A good wife or a pilgrim actress in the park may ask a child to help her pound her corn or other vegetable garden work. Or children can be called upon to participate in a rallying exercise and learn all about 17th century defense.

Related: The Story Behind The Liberty Bell & Where To See It

Pilgrims did not land in an uninhabited void, there were indigenous peoples who had lived here for over 12,000 years. At the Historic Patuxet, you can see and know everything about these people who greeted the first of the Pilgrims.

Here we can enter wetu (or the local native house) and sit on the plush fur-lined benches and play traditional games made from animal bones. The people who lived here were the Wampanoag communities.

We can even see the staff working on the manufacture of canoes (called mishoon). It is also an interactive museum, so guests can be called upon to help with work and household chores.

Visiting the Mayflower II and Pilgrim Memorial State Park is a great educational experience for families. It offers an overview of America’s early colonial beginnings, life, times, beliefs and patterns of the time.

Next: Everything You Need To Know About Virginia’s “Historic Triangle”

These are the three most popular summer destinations for 2021

Aaron is a first-hand traveler who has visited over 70 countries around the world. He is passionate about travel and opens the world to other intrepid explorers.

The Glorious Kashmir Museum on the Road to Restoration